I look for new investing ideas (and reject them as quickly as possible) a number of different ways.  I review my favorite investors’ 13F filings, I review Value Line each week, I read two newspapers and The Economist, and I scan OpenInsider weekly to see what executives and board members are buying their own company’s shares.  But I have been having the feeling lately that I’m still missing out on a lot of companies, particularly very small cap companies.  If they’re not covered in Value Line, if insiders aren’t buying, if I don’t hear about them through my general reading, and if they don’t show up on an investor’s 13F filing who I follow then I’ll miss out on ever hearing about them.  And I have been feeling like that’s been happening too much.  For example, Mohnish just bought GrafTech, and I would not have heard about them if they hadn’t showed up on his 13F because they’re not covered by Value Line right now.

Since I’m working with a small amount of capital, my investment universe is any American public company.  I want to make my knowledge of investment opportunities as wide as possible.  I don’t want to miss out on any opportunities just because they don’t show up in a 13F or in Value Line.

I’ve been trying to figure out how to get exposed to more companies, and I think I came up with a cool idea.

For the last couple of years I’ve been scanning The Wall Street Journal’s 52-week highs and lows almost every day they publish it.  Normally I’ve just scanned the lows to see if any names I recognize are selling at their one year low.  This is done to make sure I know when wonderful hold-forever kinds of businesses like Hershey’s, Colgate, Berkshire Hathaway, and Coca-Cola are potentially on sale.

But now I am going to add on a new usage when I scan the 52-week highs and lows five days a week.  Now I’m going to use this as an opportunity to learn about new businesses I don’t know about yet and continually expand my investment universe.

I said on the podcast last week that I was going to scan the lows for five businesses I’ll pick out at random to briefly learn about and put into my investment universe.  But after thinking about it, I’ve decided to also scan the highs for five businesses to learn about as well.  I’m always on the hunt for the rare 100 bagger and for the 100 baggers that get there through massive sales and/or profit growth, there’s a good chance they’ll often be at their 52-week high. 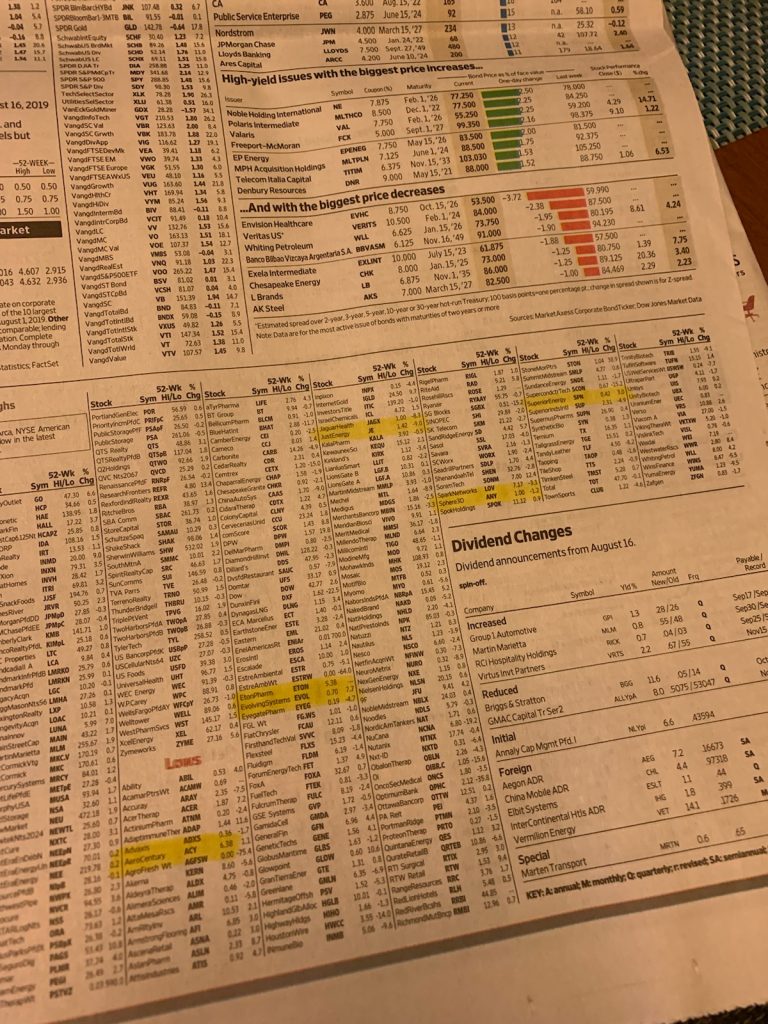 As noted above, our job is to reject stock ideas as quickly as possible so we can get back to our general reading.  So in that spirit, I’ll be picking five highs and five lows each day by randomly just running down the list and picking out the names, but I’ll avoid anything that looks pharmaceutical and bio-tech, as those industries are outside of my circle of competence.

Then I’ll briefly look up the companies online.  I’ll quickly read about what they do, and if they seems like something that’s in my circle of competence then I’ll look at some valuation metrics and most of the time reject them at that point and move on.  But doing this daily will be a great way to get ten new companies into my investment universe.

Ten companies five days a week is fifty companies a week.  After a couple of years at this, almost every stock in the United States probably will have come across my desk at some point and will be in my universe of investment options.

Enough talk for now though.  I’m going to go look up five highs and five lows from today’s paper and put ten new businesses into my investment universe.