Every time I see Chipotle I want to cry.  I think of all the money I should have made investing in Chipotle stock in 2016 and 2017.  It was fat pitch right down the middle of the plate, and I didn’t swing.  A big fat sin of omission.

Look at this!  In 2016 and 2017 I had the opportunity to buy a really good business with tons of long-term potential at a good price.  And all I could do was fart. 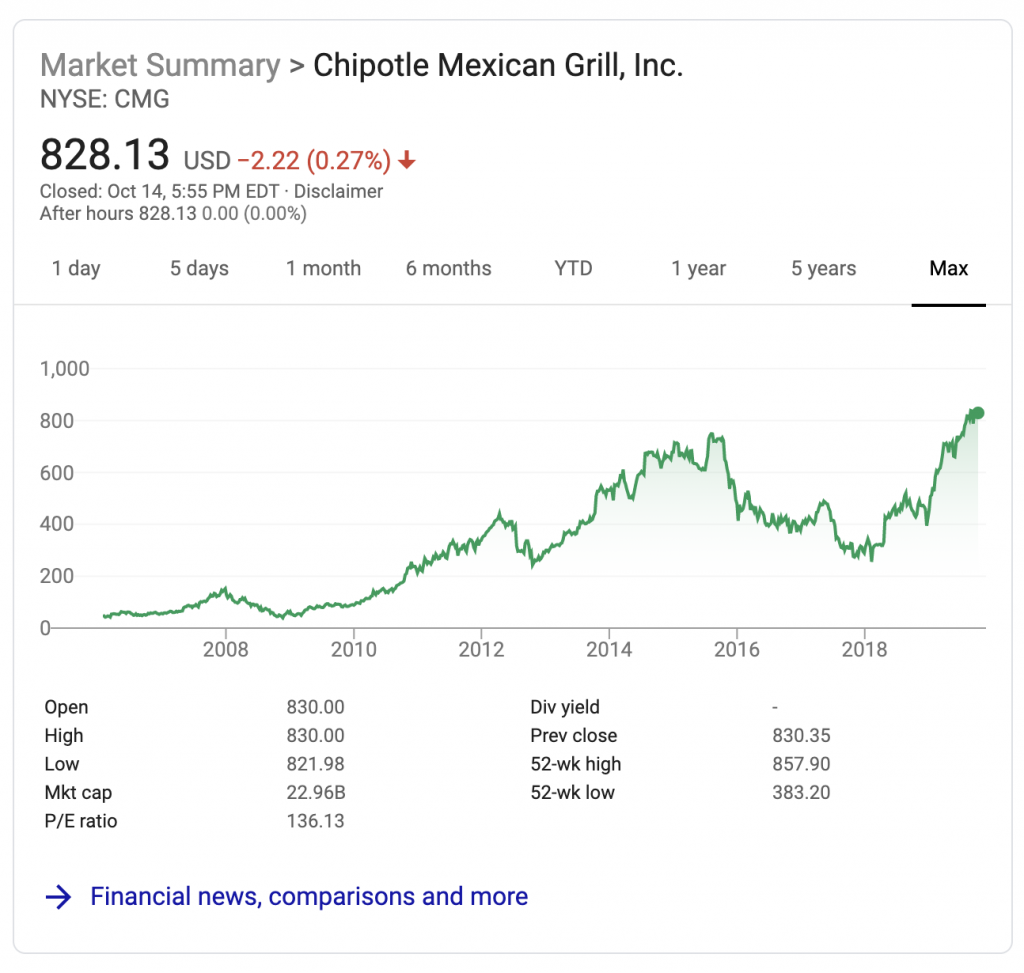 The frustrating thing about this mistake is that it was personal for me.  I followed all the news stories about the issues they were having, but despite that bad news, I knew people that were still going to Chipotle multiple times a week.

One of my extended family members is a Chipotle super fan and during that period I would quiz him.  Hey did you see the latest story about their issues?  Hey did you see how many people got sick this week?  And the maniac didn’t care!  He’s would say “I’ll take my chances” and he’d drive over to Chipotle, order up a burrito, and enjoy pure bliss for the next half hour.

I don’t want to get graphic here, but the brand had some serious issues.  The food safety issues they were having kept me and a lot of people away.  But I should have better-understood how deep the connection was between Chipotle and their super fans like my extended relative.  It was right in my face and I didn’t take action.  His never-ending love for their burritos should have been a catalyst for me to drop everything and say WTF, I’ve got to study this opportunity and determine if we have a buy here.

In retrospect it’s so obvious.

Mohnish had written about Chipotle’s customer loyalty moat in the Dhandho Investor, my relative was showing me Chipotle’s fans would never leave, and it seems like lots of major restaurants have had a food safety issue at some point in their history and they all bounce back from it.  I remember hearing business stories at the time about brands I know who had their own issues twenty years ago and no one cares today or even remembers.

Chipotle also had a lot going for it beyond the likelihood they would bounce back from the issue they were dealing with.  They had little or no debt, they were a growing company with plenty of runway (sales and earnings are growing and I think restaurant count is growing by over 5% a year), and trend-wise they just nail it in terms of what’s hot right now with their fast casual model and their protein rich food.  And they are also in-line with the digital and delivery trends.  I hear their food does well with delivery and their digital sales are growing 40% a year.

The cherry on top is their new CEO, Brian Niccol. This guy is just the man and the perfect guy for the job.  His last job was as the CEO of Taco Bell.  He did great at Taco Bell, making that brand hot and unique.  Sales per restaurant at Taco Bell grew 25% during the time he worked at Taco Bell from 2011 to 2018 (CEO from 2015 to 2018) after being flat for three years prior to him starting there (his LinkedIn shows his timeline there).  I can tell from interviews like this that he understands brands and the importance of being differentiated and unique.  And I also like his focus on core strengths and lining those up with current trends (digital, protein, etc).  I’m impressed by Brian Niccol and he’s off to a great start.

The thing is, the stock never looked cheap in real time, at least to me.  A PE of 20, hundreds of people getting sick, it didn’t look great.  But they turned it around, a growing business was selling for a decent price, and zoom up goes the stock price since then.

I do my general reading every day, I follow the news, I’m aware when things like this happen.  And next time I’ll be more on the ball about sensing opportunity and firing with big purchases when a situation like this happens again.

This sin of omission was a big mistake, and it hurts every time I see how well Chipotle is doing, but it’s this painful feeling that will motivate me to do better in the future and to take advantage of this kind of situation next time.

Cheers to Chipotle’s comeback, and here’s to hoping I won’t miss the next opportunity when a great business is on the operating table.